Antioxidants are famous for their health benefits. But what do they do? Here, we’ll talk about the basics so you have a general idea of what’s going on.

It’s impossible to talk about antioxidants without mentioning free radicals. Sometimes called Reactive Oxygen Species (ROS), the term “free radicals” simply means unstable molecules. Generally speaking, the majority of free radicals come from the body metabolizing oxygen. They increase oxidative stress where they go on to damage cells and DNA, ultimately leading to all sorts of diseases. Some examples here:

Several factors affect the amount of free radicals we produce. These include the food we eat, the air we breathe, and the amount of radiation we’re exposed to. While we often say that free radicals are bad, it really depends on where you get them from. For example, exercising creates free radicals, but we wouldn’t say that exercising is bad. That’s because other things are happening during exercise.

Antioxidants are substances that can protect your cells against free radicals. It literally means anti-oxidation. A diet high in antioxidants may reduce the risk of many diseases. However, they aren’t created equal. Some have very good absorption, some can work on the brain, while some gets excreted from your body very rapidly.

Most antioxidants that you see in supplements come from plants. That’s because plants, on a day-to-day basis, have higher oxygen and sun exposure. This creates more free radicals, meaning that they need more antioxidants to combat this. A similar concept is the eyes. As we spend more time staring at computer screens, our eyes gradually deteriorate. Naturally, we have defensive mechanisms for this, but it’s just not enough. To supplement this, many people recommend taking lutein as it acts specifically in the eyes.

Here is a table of the different kinds of antioxidants. And as you can see, there are A LOT of categories. Some of these contain more subcategories, but you don’t need to learn all about them. 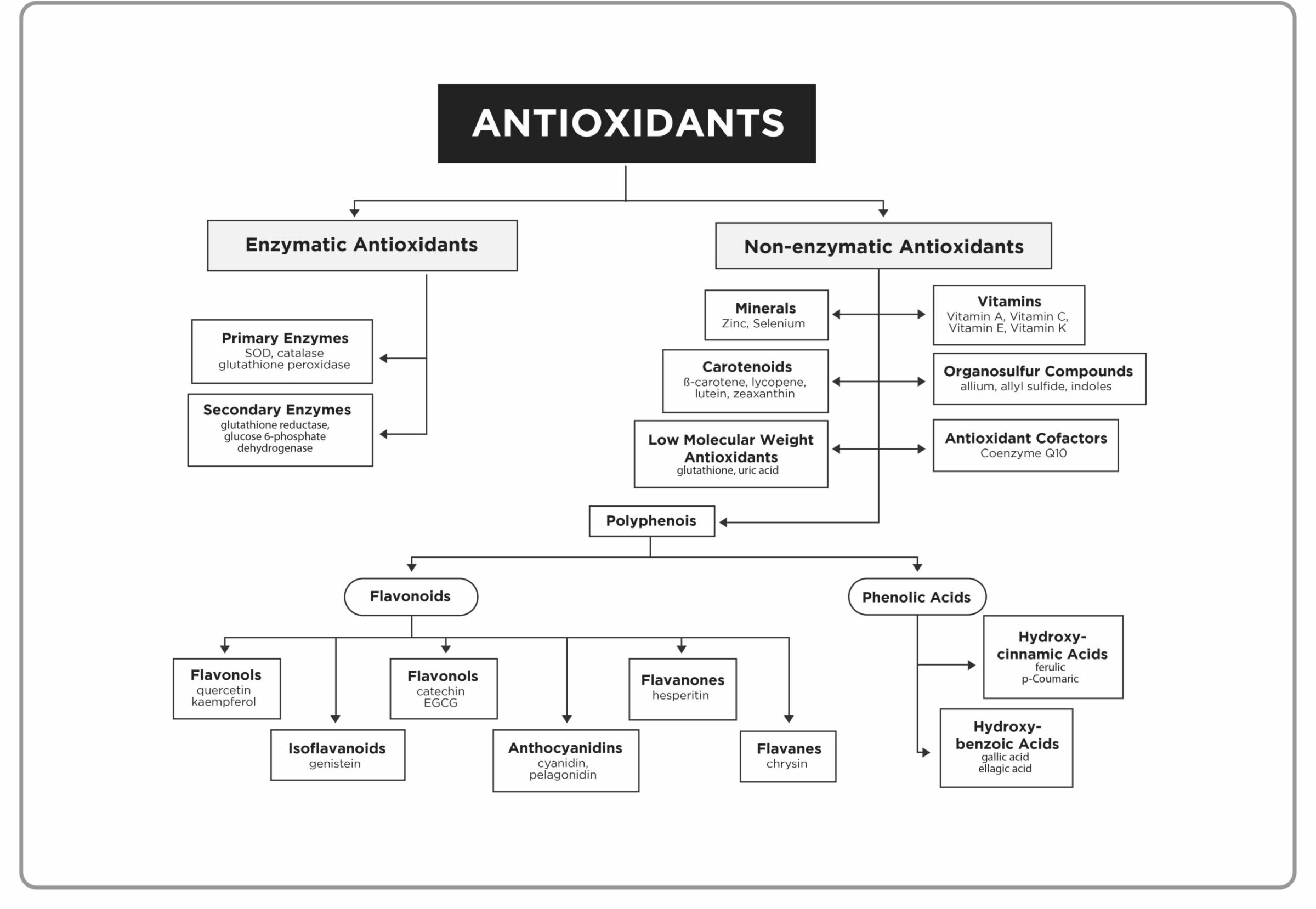 Each compound is unique and do a variety of things. Some may work for you while some may not. Currently many research is still underway to confirm their efficacy and safety, which in turn locates each compound’s place in therapy.

Antioxidants is a very broad term and the substances that fall under this category is immense. Are they interchangeable? Can one replace the other? That will depend on your specific needs and the specific antioxidants. For example, if you are taking astaxanthin for the eyes, you can swap it out using zeaxanthin. However, if you’re using astaxanthan for joints then zeaxanthan isn’t for you.

There has been debate over the years that whether individual antioxidants or whole foods work better. While whole foods contain a mix of antioxidants, the doses are small as compared to that in supplements. Some substances work better when taken in supplement form. For example, lycopene has an effect in reducing blood pressure while tomatoes obviously don’t have that effect [2].  Moreover, there’s another argument that their health benefits may not even come from their antioxidant properties at all. So it’s very hard to compare between the two and there really isn’t any reason to. That’s why, some companies may opt to combine both the active ingredient and the extract of the plant which contains the best of both worlds. These are generally recognized as superior formulas, but it does come with a cost: more expensive and more capsules/tablets to take.

Generally speaking, antioxidants are very safe. Many of which are also safe when consumed in large amounts. However, some particular ones to not overdose on include vitamin A, E and beta-carotene. There are concerns that these antioxidants when consumed in excess, might cause cancer if taken for long periods of time. However, these are just extreme cases of overdoses, and we don’t recommend people taking too much of anything anyway. On the other hand, vitamin A can cause birth defects in pregnancy even when it’s not overdosed (Fun fact: pregnancy multivitamins use beta-carotene instead). So, this antioxidant/vitamin is a special case. And that being said, it’s always a good idea to check with a professional before you take a particular supplement.